Looking Back – Read more about the historical journey of Phoenix

In 1978‚ Women´s Health Care House and Australian Women Against Rape (Perth) organised a publicised 24 hour ‘phone-in’ service designed to give women who had been sexually assaulted an opportunity to speak about their experiences. Of the 150 calls, more than half related to intra-familial sexual abuse.  These calls about past abuse were unexpected and social worker Nancy Rehfeldt led a group of volunteers who formed self-help and support groups after identifying that most of the women callers had been silenced and not supported by their families and loved ones. Many callers were profoundly depressed and had a mental health diagnosis.

In 1986, ISA was offered partial funding by the State Government to provide professional services to the community, recognising that the thousands of annual phone calls identified a large‚ hidden‚ community problem. From this time onwards, all staff had to have tertiary qualifications and clinical supervision and the association had contractual accountability provisions to the State Government.

In 2015, ISA underwent the rebranding process so the new name of the organisation would reflect that the support provided was now offered more broadly, and beyond survivors of incest. The service was inclusive of all survivors of child sexual abuse and supported non-offending family members and significant others impacted by a disclosure, as well as advocating for those without a voice.

In 2016, ISA was rebirthed as Phoenix Support and Advocacy Service Inc. with a new logo. The new logo, as displayed here, represents a service that operates from the heart with compassion. The logo also shows the symbolic bird known as the ‘Phoenix’ that rises from the ashes. The rays of the rising sun are casting light and bringing hope for a bright new day and road ahead.

Phoenix operates as a non-government, non-for-profit charity and currently has a ‘Preferred Provider Status’ service agreement with the WA Government’s Department for Communities.  Additional funds are raised from service fees‚ grants, and some donations.

Before we look forwards, it is important to highlight the immense contribution and leadership of our founder, Nancy Rehfeldt. Nancy’s ground-breaking work led to changes to sexual assault laws, better services for abuse survivors and mandatory reporting of suspected child sexual abuse. Nancy stands as a leading light in bringing the prevalence of child sexual abuse and the need for critical support into the open. Read more about Nancy’s extraordinary life’s work here. 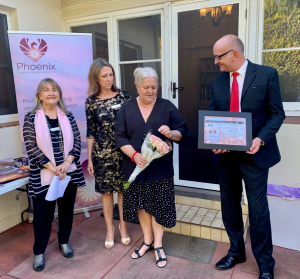 Phoenix celebrating the retirement of Office Manager Lois Lloyd, following 34 years of service to the organisation.

Phoenix has expanded its services recently through a Lotterywest seeding grant to include a fee-for-service business arm known as Phoenix Professional Development and Prevention Services.

As we move forward in this space and walk alongside those who have their stories to tell, we offer a platform to connect, a safe place to be supported, and professionals who are ready to engage with the wider community services sector and contribute to ‘Creating Compassionate Communities’.

Phoenix is now delivering trauma-informed training with a focus of self-regulation along with family and domestic violence training that looks through the lens of child protection and safety. We work to empower survivors of historical child sexual abuse to take back control of their lives, and as we rise together, we break the silence of shame and fear.

Together we will rise, with Phoenix.

“The information was clear and well organised. All the information and skills that were presented were very applicable to my day-to-day practice.”

“I believe this training is very positive and the model is very good to work alongside our families.”

Hear from our training participants

Connect with Phoenix on social media. Follow us on Facebook here and stay connected to all the latest industry news on LinkedIn here.

Welcome to the Phoenix Website. We hope you find it useful and supportive when you take that first step towards recovery.

Please be mindful of your safety while browsing and click on the ‘Quick Exit’ button if you need to hide this page quickly. Always delete your browser history when finished and it is safe to do so.

For more advice about internet safety, click on the ‘Online Safety’ option under ‘Clients’.

This will close in 12 seconds